Find a place to kayak on a holiday weekend where you won’t be endangered by speedboats? Easy on DELMARVA. We have discovered a number of special spots where even a holiday weekend will find you paddling without any other boats in sight. Saturday, May 26th was during the Memorial Day weekend this year which meant power boat traffic at many of the kayaking sites we like to frequent.  So on this Memorial Day Weekend 2018, we headed for Girdletree, Maryland and the launch at Taylor Landing:  one of our very favorite spots.

Part of the E. A. Vaughn Wildlife area, several mapped kayaking trails are available, plus countless other exploration options. One choice is to circumnavigate Miles Island, which is pretty and fun but can be difficult on windy days.  With the wind over 10 mph on this Saturday we decided to stick with the two nearby creeks (Scarboro and Pikes) which offer protection from high waves and wind.

Heading around the point to Scarboro Creek

Setting out from Taylor’s Landing you must first round Sandy Point and then backtrack into the mouth of Scarboro Creek.  An easily spotted deteriorating hunting stand still marks the entrance. Along the way you pass numerous crab cage floats which seem to increase every year.  Once entering Scarboro you are in a broad expanse surrounded by marsh grass and bordered by hardwood forests. On a windy day the hardwood forests help to break the wind as you paddle upstream.

Our trip started near high tide which resulted in a lack of shorebirds along the creek edge.  However, numerous wrens sang and flitted in the marsh grass, and we saw many Great Egrets flying around distant stretches of land.  At one point the creek is lined with wild white flowers which appear to be some form of Mountain Laurel.

Eventually the broad expanse of the creek tapers to a narrow passage way.  The map posted at the landing states there is a three mile one way paddle on Scarboro Creek. We assume this also includes the distance from the landing to the mouth of the creek since we were just two and one half miles from the landing when the creek dead ended in the marsh.

Each time we paddle Scarboro Creek it changes course just a bit from the silt being washed downstream. We stopped for lunch on the way back near a strange looking tree.  It appeared this tree had fallen over, but the roots in the exposed root ball were able to send shoots up skyward.

By now the tide was beginning to go out and Willets were walking along the shore and also hiding in the grass. 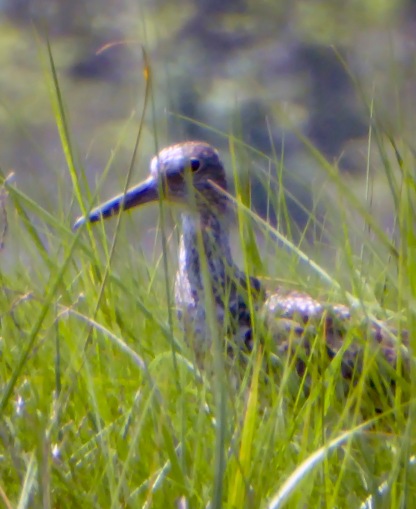 Willet hiding in the grass

Willet in the water

We also spotted a few ducks including a female Bufflehead and a male American Black Duck. Common and Forster’s Terns were diving all around us busily hunting for food.

Returning to the mouth of Scarboro Creek, we paddled along the right shore to reach the Pikes Creek shortcut. 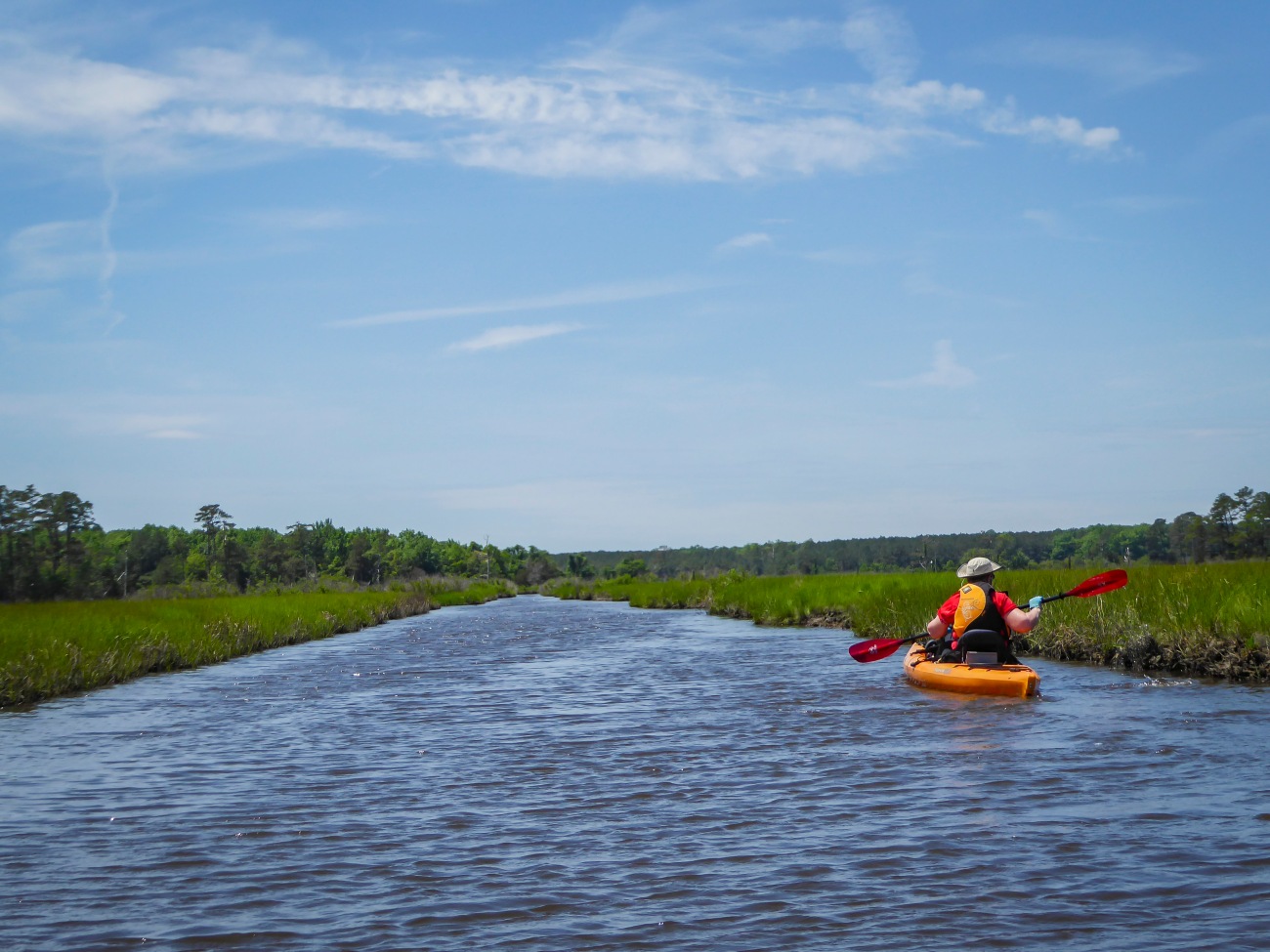 We decided to only go a short distance into Pikes Creek this day, but we spotted an immature Double-Crested Cormorant perched by two Common Terns as we paddled by.

Our return to Taylor Landing was not as difficult as we feared it might be.  The wind had not picked up appreciably and the only boat traffic we saw was one lone crabber.  All in all it was a very nice Memorial Day Kayak. 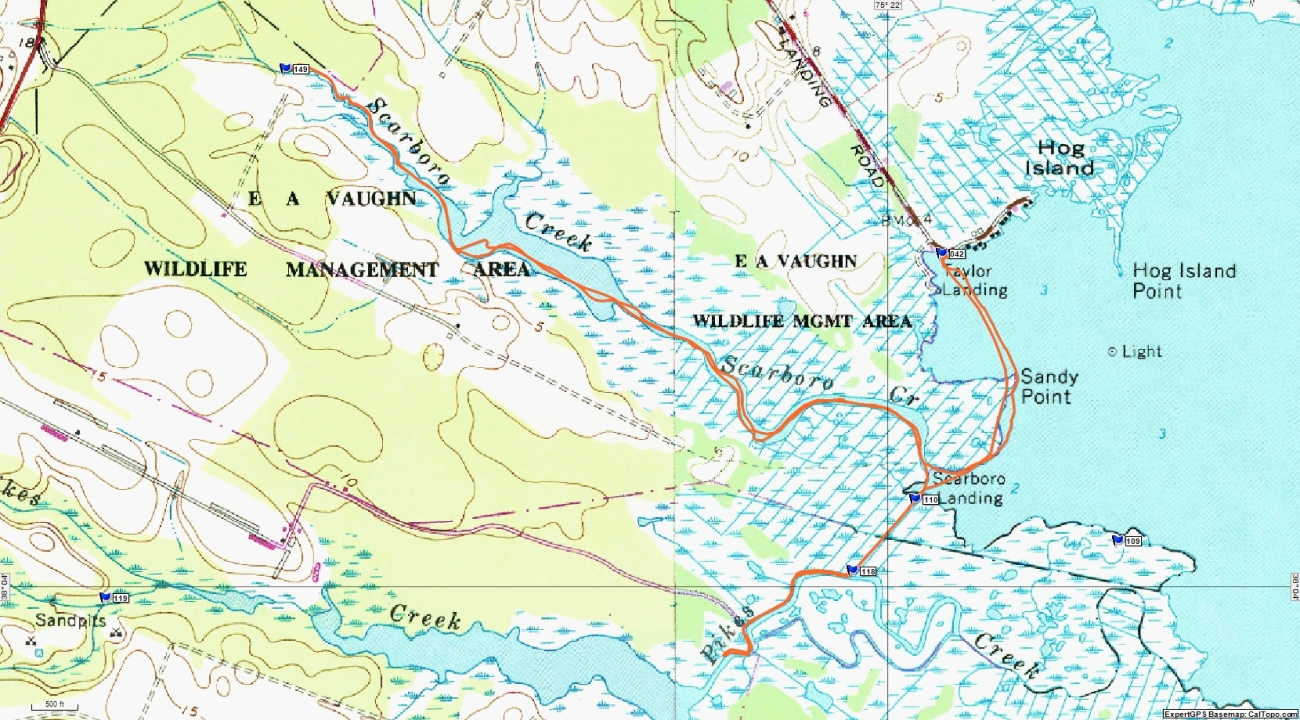 GPS Map of our trip

Directions to Taylors Landing: At the intersection of 113 and 12 in Snow Hill turn south on 12 to Girdletree, about 5 miles. Entering Girdletree, turn left on Box Iron Rd. Go to stop sign, bear left and then stay to the right. Road dead ends at Taylor’s Landing. Port a john is in the parking lot. There are no services in Girdletree. Stores, restaurants etc. are in Snow Hill.

Stuff That Needs To Be Said

Paddling the Eastern Shore and Beyond

Fitness, Adventure and Art on the High Seas!

The Pink Kayak
The Casual Outdoorsman

What should we do today?

Your daily guide to exciting and enriching activities for your kids throughout Delmarva!

"Tell me and I forget. Teach me and I remember. Involve me and I learn." -Benjamin Franklin

Nature Knows No Such Barriers

Cooking with a Wallflower
The ancient eavesdropper

Nature's nuances in a nutshell

nature has no boss